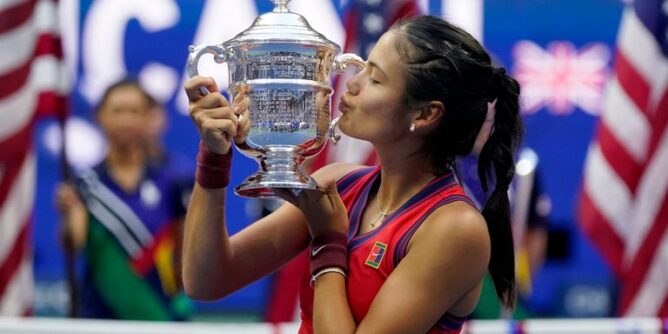 The one thing that makes online tennis betting so exciting is that tennis is a very unpredictable sport. A player with a meteoric rise who becomes #1 in the rankings in one year can fall out of grace and disappear from the podiums in the next, only to return in excellent form and dominate all tournaments a year later. And, of course, there are always newcomers with a ton of talent and dedication showing up at grand slams and shooting straight into the spotlight.

This is the case of Emma Raducanu, the latest tennis star who recently won the prestigious US Open. Who is she, and where is she coming from?

Who is Emma Raducanu

Emma Raducanu became a professional tennis player in 2018 but she didn’t dedicate all her time to WTA in the coming years, alternating between Women’s Tennis Association events and junior tournaments – she was under 18 at the time, so a fit for both of them. Her first major tournament win was W25 PUNE in India, a tournament with a top prize of $25,000.

She gained entry on a wildcard to the 2021 Nottingham Open that was her WTA Tour Main Draw debut. Later this year, she made her main draw Grand Slam debut at the 2021 Wimbledon Championships, where she advanced to the third round, defeating Vitalia Diatchenko (WTA no. 71)  and Markéta Vondroušová (WTA no. 38) to become the youngest British female tennis player to reach the third round in Wimbledon since Elena Baltacha in 2002. She then proceeded to defeat Sorana Cîrstea, reaching the fourth round, breaking into the WTA top 185 (from no. 338 at the start of the tournament) but had to withdraw from her fourth-round game against Ajla Tomljanović due to breathing difficulties.

After further matches and a major change in her coaching team, she entered the US Open way out of the top 100. After her repeated victories at the tournament, she climbed in the ranking very fast – her victory at one of the most prestigious tennis tournaments in the world has pushed her to no. 23 just a few days ago.

It’s an absolute dream. You just have visions of yourself going up to the box, hugging everyone, celebrating,” she told the press in her post-tournament interview. “For that moment to actually happen, I’m just so grateful.” After her victory, Emma Raducanu was congratulated by a host of celebrities, British Prime Minister Boris Johnson, Dutchess Kate, and HRH Queen Elizabeth herself.