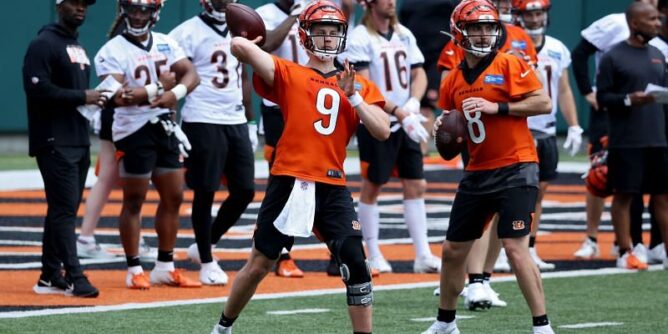 With just weeks to go until the NFL regular season gets underway, excitement and speculation is building about how each franchise will fare and which players will shine under the spotlight.

Experts and pundits from across the world have been giving their takes on how the season could play out – will Tom Brady lead the Tampa Bay Buccaneers to a second straight Super Bowl, or will the Kansas City Chiefs prove the NFL odds correct and become champions?

What everyone can agree on is that each franchise will need its star players to perform at their absolute best if they want to make the playoffs. Some will need other players to breakthrough and step out of the woodwork to establish themselves as top-tier talent.

So, who is most likely to do so? Here are five players who look set to shine in the upcoming NFL season.

As mentioned, the Chiefs are the betting favorites to win this year’s Super Bowl and a big part of that logic is the undeniable talent of their star quarterback, Patrick Mahomes. The 25-year-old is already an MVP, a Super Bowl MVP and a three-time Pro Bowler.

He’s also the No. 1 ranked player in the league and while he may not have performed as well as the Green Bay Packers’ Aaron Rodgers last season, Mahomes is an irresistible force for Kansas.

He’s the highest-rated passer in NFL history and produces wizardry anytime he’s on the gridiron. He seems primed to have an electric season with the Chiefs this season, which could well take them all the way.

A first-round draft pick in 2018, Alexander had an excellent 2020 season, surrendering fewer yards-per-target than any other regular cornerback in the league. Plus, he’s just 23 so has a few years on the likes of Xavien Howard and Jalen Ramsey.

In fact, Alexander might just be the NFL’s top corner at the moment. He’ll certainly be looking to earn that plaudit this season, particularly as he is in fine form. Over the past few seasons, almost all of his stats across the board have continued to improve, suggesting he may be very close to hitting his peak.

Based on his past performances, Alexander’s best may be better than anyone else’s in this position and he could be a crucial part of the Packers lineup this season.

The Bengals certainly aren’t expected by many to make a playoff run, but they do have one of the most intriguing quarterbacks in the league; Joe Burrow. In his rookie year last season, Burrow had to contend with a few issues out of his control but still managed to post some solid numbers.

He passed for 2,688 yards with 13 touchdowns and five interceptions, and that was even with an offensive line which allowed him to be sacked a startling 32 times within 10 games. He also suffered a torn ACL toward the end of the season.

By all accounts he’s now fully recovered and back to fitness, meaning he’s looking at an entire season where he’ll be able to leave his mark. Expect him to shine within a Bengals team that may struggle to match his level.

A locked-in future Hall of Famer, Donald is on course to become the most decorated defensive player in NFL history. The Rams defensive lineman has been named Defensive Player of the Year three years in a row for a reason, and he’s showing no signs of slowing down.

There’s an argument to be made that no other player in the league is as dominant in their respective position as Donald. He’s made the All Pro first team six times already and he’s not even hit 30 years of age yet.

Last season may have also been his best one yet and if he can kick this campaign off in the same kind of form, he’ll once again be a force to be reckoned with.

One of the most exciting aspects of this new season is being able to witness the impact of No. 1 draft pick Trevor Lawrence. After a woeful 2020 season, the Jags were able to lock in the star quarterback.

Lawrence has shown all the signs of being a generational talent and has the physical attributes – size, speed, athleticism, strength – to establish himself as one of the best players in the NFL in a very short space of time.

This rookie season will be an important one for him and Jacksonville, but he really could set the league alight and usher in a new chapter for the Jaguars.

There are, of course, countless other excellent players who could well hit the ground running when the season kicks off and alter the expected dynamic of the league. From already established stars to entering rookies with bags of potential, the stage is set for the finest football players on the planet to prove their worth.