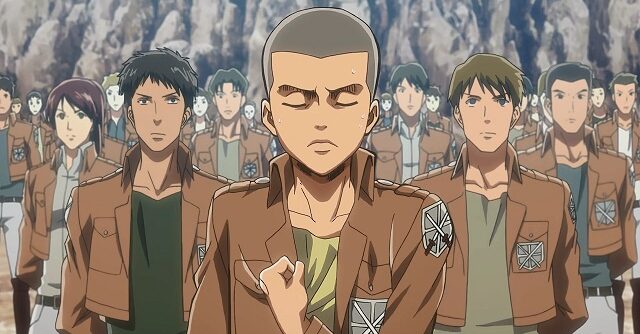 Connie Springer is a major supporting character in the Manga/Anime series, Attack on Titan. He was a member of the 104th Trainee Corps. On graduation, he joined the Survey Corps. He is best friends with Sasha Braus and Jean Kirschtein. He is voiced by Hiro Shimono in the Japanese version of the anime, and by Clifford Chapin in the English version of the anime, who also voiced Katsuki Bakugo in My Hero Academia.

Abilities of Connie Springer placed him in the top 10 of the graduated trainees. He is said to be “slow on the uptake but makes very sharp turns.” Although his combat skills and swordsmanship are average, he is very talented at using the vertical maneuvering equipment. This makes him one of the fastest soldiers of the Survey Corps, rarely having to engage Titans in combat. He has yet to be seen successfully slaying a Titan.

Connie used to be one of the shorter members of the Survey Corps, standing two centimeters shorter than Levi Ackerman. He has a slim build, with gray eyes, and his brown hair is distinctively kept shaved. Connie is typically dressed in standard military garb, and will don the Survey Corps cape when on missions. His casual attire consists of a simple long-sleeve white shirt and shin-length brown slacks.

By the year 854, Connie has grown significantly taller, now standing slightly above average height. His hair has grown slightly longer, but stays in the same general style, and his facial features have sharpened. During the Raid on Liberio, he wears a black uniform, with belts and support rods for his anti-personnel vertical maneuvering equipment.

After transforming into a Pure Titan, Connie’s Pure Titan grows tall enough to reach and attack the Armored Titan’s head. It lacks proper flesh on its cheekbones, exposing its teeth. Indeed, it lacks an upper lip or skin above it, exposing its gums up to its nose. It otherwise retains most of its human features.

Connie can be best described as outgoing and impetuous. He has an easy time expressing his opinions, and enjoys flaunting his skills, especially during his days as a trainee. Despite being in the military, Connie starts off as rather unfocused, and enjoys goofing around and messing with his friends, but can also be a bit dense at times.

Later, Connie’s naive enthusiasm falls away after multiple close encounters with the Titans. He never becomes more serious, though to his frustration, he still has some difficulty comprehending new developments as they appear. Connie also comes to terms with his own limits, disliking his lack of power, but eager to prove his worth. For a long time, Connie remained optimistic, consistently caring for the well-being of his friends, family and village, and being willing to help in any way he can.