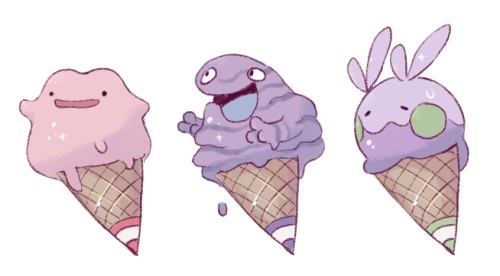 Its large ovular eyes have dark blue pupils. Like its pre-evolution Vanillite, Vanillish has small diamond-shaped ice crystals on its face, just below its dark blue smiling mouth. Vanillish has two short triangular limbs that resemble chips of pointed ice, which seem to serve as its hands. It has a conical lower body that resembles a large ice cream cone or an icicle. Its entire body is made of an icy substance, and if exposed to intense heat, the snow covering its head can melt just like its pre-evolution does.

Vanillish live in southern, snowy mountains, which they had migrated to during an ancient ice age. They create ice inside their bodies by drinking water and then expel it to hide or freeze opponents, and they can shatter frozen opponents with powerful headbutts as well. Vanillish are smaller in hotter regions, and though one can refreeze its snow despite melting, this process can leave its appearance warped. Despite this, they are very popular in the tropics due to their air-chilling abilities.

Trainers in regions like Alola must treat their Vanillish periodically with insulating spray to keep them cold. Such individuals also tend to be smaller than those found in polar areas. Though once widespread during a past ice age, areas suitable for Vanillish and their relatives shrank and became isolated from each other during a warming period, separated by bands of warmer temperatures that they could not cross. Today, they can only be found in the icy parts of the southern hemisphere and a select few other chilly areas.

Despite their powerful ability to freeze their foes solid, Vanillish are surprisingly kind Pokémon. They dislike violence and prefer to immobilize attackers just long enough for them to flee without harming them any further.

Vanillish can conceal themselves from foes by creating many icy particles in the air and shrouding themselves among them. They also use these ice crystals in battle to freeze their opponents. Vanillish evolves from Vanillite at level 35 and then evolves into Vanilluxe at level 47 (Ice Cream Pokemon).

Vanillite debuted in Ash and Trip’s Third Battle!, under the ownership of Trip. It was used to battle a wild Palpitoad, and then in Trip’s battle against Ash. During the battle, it was pitted against Tepig, and both were eventually knocked out.

In The Mighty Accelguard to the Rescue!, Cryogonal Man’s henchmen own two Vanillite that assisted their Trainers in their schemes. Both were eventually defeated by Pikachu and Linda’s Timburr.

In Cilan and the Case of the Purrloin Witness!, Teaque used a Vanillite in the Marine Cup Tournament during his battle against Iris. It defeated Axew in the first round. Vanillite later helped steal the “Eye of Liepard”.

In Thawing an Icy Panic!, a Vanillite had been separated from a Vanillish and a Vanilluxe during their journey. It was taken care of by Nurse Joy in Coumarine City and soon became a minor local celebrity. It was eventually reunited with the Vanillish and Vanilluxe by the end of the episode (Ice Cream Pokemon).

In Kyurem VS. The Sword of Justice, Malin’s Vanillite would help her with selling Oran Ice at her lunchbox stand.

In Errand Endurance!, James pulled a Vanillite from the Rocket Prize Master.