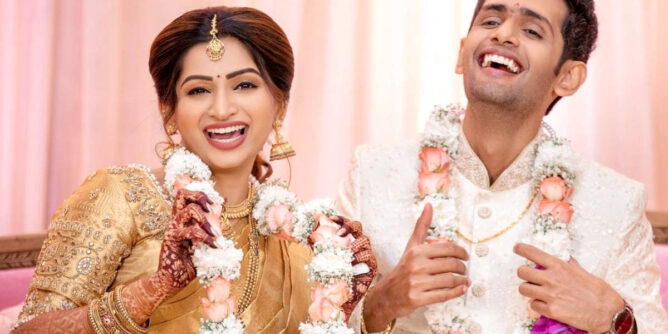 Before hosting Sun TV’s Sun Singer and hosting award shows like ‘Sun Kudumbam Viruthugal’ as well as the ‘South Indian International Movie Awards’, Nakshathra Nagesh started her career as a host on Thanthi TV’s Vaanavil. Additionally, Nakshatra has made appearances in short films like ‘En Iniye Pon Nilave’ and supporting roles in dramas like Settai and Vaayai Moodi Pesavum.

After that, Nakshathra Nagesh co-starred in one of the first Tamil-language online series, As I’m Suffering From Kadhal, created by Balaji Mohan. One reviewer said that Nakshatra ‘looks gorgeous and does her job flawlessly.’

After then, Nakshatra got her first leading role in a Tamil drama for prime time in Khushbu’s television series Lakshmi Stores. Nakshatra garnered a great deal of praise for how she portrayed the modest deity Bhagyalakshmi. In 2018, the Chennai Times ranked her as the fourth most beautiful woman on television.

Raghav, her longtime boyfriend, proposed to her. The actress posted a photo and the news to her social media accounts. The customary engagement ceremony for Nakshathra Nagesh and Raghav was held in front of loved ones, family, and friends. Nakshathra Nagesh announced Raghav, her Mr. Right, to the world on 21 January 2021, officially establishing their partnership. Upon responding to questions about her wedding in later interviews.

In school, Raghav is Nakshathra’s senior, and the two have known one another for a very long time. With the support of loved ones and friends, Nakshathra & Raghav are entering the next phase of their lives, which is marriage. Her followers were overjoyed to learn of Nakshathra Nagesh and Raghav’s engagement, which was announced just days after her boyfriend status was revealed.

Nakshathra Nagesh received her education at the Chettinad Vidyashram in Chennai. Prior to beginning her career as just a jockey in show business, she attended IHM to study hotel management.