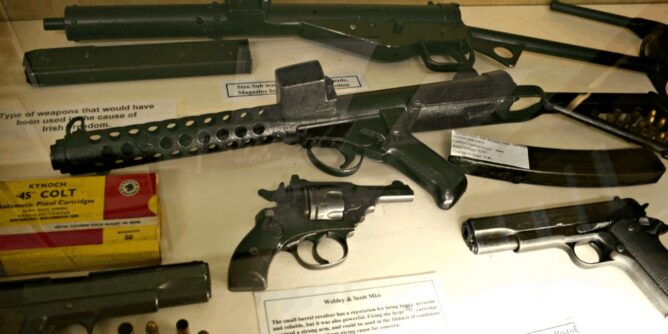 Guns, fueled by industrialization and grabs for power, have driven both conflict and progress in American society. Some of the bloodiest fights in history have been made deadly by the use of guns. Yet, they have also won wars, made hunting easier, and gained America an international reputation.

Let’s get into the good, the bad, and the sometimes complicated history of guns.

Exploding Onto the Scene

When thinking about the history of guns, it’s easy to assume that Europe created the first firearm. But the firearm industry began much earlier than that and much further east.

Gunpowder was discovered in China by alchemists looking for the elixir of life. As early as 850 C.E., this “black powder” was used to treat indigestion. Later, alchemists discovered it was highly flammable and it began to fuel fireworks.

The first weapon to use gunpowder was called a fire lance. This early piece of weaponry consisted of a powder-filled tube attached to the end of a bamboo or bronze rod. Acting like a flamethrower, this gun was used during the Jin-Song Wars along with its more cannon-like counterpart, called a Flying-Cloud Thunderclap-Erupter.

Of Mongols and Men

Traveling along the Silk Road, gunpowder and guns came to the Middle East sometime between the late 13th and early 14th centuries.

There is debate whether these early guns were used by the Mongols or used to fight against them. But, by 1465, the Ottoman Empire was regularly using muskets in combat.

There are two different theories for how gunpowder came to Europe.

The first suggests that gunpowder came through the Silk Road along with other goods, like silk.

Another theory argues that gunpowder appeared with the Mongol invasion in the first half of the 13th century.

Whichever is true, the arrival of gunpowder and its accompanying firearm technology marked a moment of change in Europe. As the 14th century dawned, Italians discovered the joys of being able to launch huge hunks of metal at one another.

Where bows and arrows did little to pierce combat armor or deter hearty war horses, primitive cannons could pierce even the toughest metal and take out ranks of soldiers.

Handguns, made from blocks of iron divided into a barrel and handle, could also be used by soldiers with almost no training. For this reason, they grew to define warfare in 14th and 15th century Europe.

The History of Guns Across the Atlantic

By the 15th century, firearm design had advanced well past the iron blocks of the Middle Ages. German-made guns, such as the Blunderbuss, dominated the market. Meanwhile, newly designed matchlock muskets made ignition easier.

As in the past, guns followed travelers from one part of the world to another as early settlers set out for North America.

The Most Important Man in Town

Early American gunsmiths became important members of society. Looking to feed their families, colonials turned to gunsmiths to provide them with reliable firearms. But, they were also looking for a new identity in these guns that would set them apart from England.

American gunsmiths delivered in a specular way with the development of the American long rifle.

The extended barrel of this gun, which has at points been called a Kentucky, Ohio, or Pennsylvania rifle, used twisted grooves to guide bullets. This simple enhancement created a straighter shot that revolutionized hunting.

Birth of the Firearm Industry

The Revolutionary War saw the colonials hopelessly outmatched by British manpower and firearms.

Most revolutionaries used the same British Brown Bess and French Charleville muskets totted by the Loyalists. Since these muskets could be fired 3 times in a minute, they were much more effective than the super-precise American long rifle. However, America didn’t have access to the same ammo supplies the British did. This meant that they lacked the necessary firearms to fight the war.

To combat this problem, George Washington ordered the establishment of the Springfield Armory in Springfield, MA in 1776. As the first armory in the new United States, this musket manufacturer helped to arm early Americans.

The Rise of Remington

One of these outfits belonged to Eliphalet Remington, the owner of Remington Arms Company. This company produced flintlock rifles starting in 1816.

Around this time, Eli Whitney, the inventor of the cotton gin, also designed a system to produce interchangeable rifle parts. This made it much easier to service guns and produce them en-masse.

The Gun That Won the West (and Attacked Mexico)

In 1836, Samuel Colt received a patent from the U.S. government for his handheld, multi-shot “revolver.” The new gun featured a rotating barrel with multiple chambers secured by a lock and spring.

Unfortunately, this famous gun was widely regarded as a flop.

After this big break, Samuel Colt went on to outfit not only soldiers but cowboys, Gold Rush miners, and cops. This earned his creation the nickname, “the gun that won the west.”

The Colt .45 dominated the market until the mid-1850s and is still considered one of the best firearms.

The Wild and Bloody Years

The patent for the Colt .45 expired just in time for the Civil War.

Revolvers became one of the main sidearms for both Union and Confederate soldiers. During this period, the companies Colt and Smith and Wesson developed revolvers that could swing out for rapid reloading. The so-called “double-action” design made the revolvers more deadly than ever.

It was also during this time that new ignition systems were established. This musket design protected gunpowder from rain and made it possible to fire with the tap of a trigger. Combine this added protection with a new kind of bullet, which expanded when fired, and Civil War-era musket packed a deadly punch.

These basic advances furthered war efforts on both sides. However, the increased reliability and rapid-fire features of these guns also turned an already violent conflict extra bloody.

After the Civil War, the government encouraged Union soldiers to take their guns home. This increased gun ownership in America.

But, it was a short-lived moment. Many of the black freemen who returned to the South had their firearms forcibly removed by white landowners or the KKK, who didn’t want them to defend themselves.

The double-barrel shotgun was the next big advancement in firearm technology. With a breech-loading system, gunners were able to load from the rear, saving time. This new model also merged the projectile and gunpowder into a single cartridge, which prevented exposure to the elements.

The iconic double-barrel look was intended to add more power to a shot but has also become an aesthetic choice.

When John Moses Browning invented the pump-action rifle, it’s likely he intended it for hunting. And while it is used for fowling, the gun’s automatic reload would go on to inspire a whole line of automatic weapons used in the Vietnam War.

Used in the Civil War and the Spanish-American War, Richard Gatling’s invention represents a primitive version of the well-known machine gun.

With nothing more than a hand crank, gunners could load the Gatling gun while firing it. And at 200 rounds per minute, that constant feed of ammunition could be downright deadly.

Harnessing the recoil energy to eject used cartridges and pull in the next, the new and improved Maxim Gun could fire 600 rounds per minute. This is three times the rate of the previously used Gatling gun.

If you want to understand how much power that is, the introduction of the Maxim machine gun drove soldiers in WWI to establish trench warfare. It was the only way to avoid being sprayed by a continuous wall of bullets.

Driven by the U.S. conflicts in Nicaragua and Honduras, the firearm industry developed a handheld version of the already lethal machine gun.

Though the Tommy Gun was marketed to law enforcement, Prohibition and the rise of gang activity in the U.S. meant that the gun came to represent crime.

In 1929, a Tommy Gun was used to mow down seven gang members in what became known as the Valentine’s Day Massacre. This incident inspired the first federal firearm safety and gun control law.

Perhaps the most significant firearm of the Cold War era, this Soviet gun inspired such terror in its opponents that the Pentagon led an effort to make its match in the form of the AR-15.

With a fire rate of 900 rounds per minute and gas-operated firing, the AK-47 remains one of the best firearms ever made.

While getting your hands on an authentic fire lance may be hard, the modern market for gun ownership is booming. Brands like Aero Precision allow you to shop dozens of models and firearm parts from the comfort of your couch.

And, unlike the guns of old, firearms ordered from Aero Precision can arrive in as little as one day. That’s convenience and quality you can count on.

If you enjoyed this history of guns, stick around and explore more of our blog posts! With topics ranging from health to sports, the Latest Marketplace is the home of interesting news.

Or, if you’re looking for something special for an upcoming birthday or holiday, check out our latest marketplace deals!