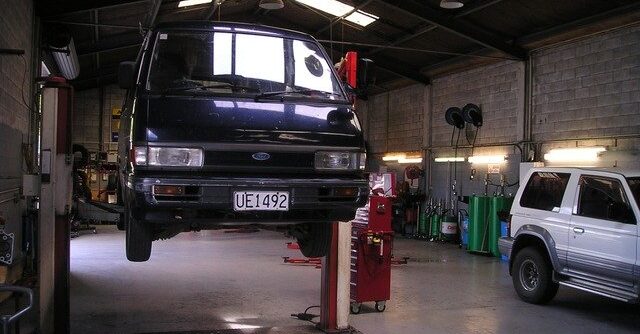 In the automotive world, change is constant. As cars evolved throughout the past century, the world around automobiles changed as well.

Massive government effort created the interconnected highway system, and the laws that governed those roads advanced as well to ensure safety and organization. It’s no surprise, then, that the concept of Motor Magic automotive maintenance has undergone substantial changes as well, as evident in the changes to tools like the hydraulic automobile lift.

Peter Lunati’s 1925 rotary lift patent was a landmark moment for automotive repair, but inventions do not develop in a vacuum. The scientific innovation leading up to that moment and the subsequent developments to enhance the design reveal a fascinating history of industrial innovation.

The hydraulic lift uses Pascal’s Principle. In the 17th-century, scientist, mathematician and philosopher Blaise Pascal first explained that putting pressure on a non-compressible fluid in a cylinder will exert equal force to all sides of the container. Through a series of mathematical calculations, engineers and technicians can calculate and manipulate this phenomenon to create powerful tools that use relatively little pressure. Though not technically a simple machine, a hydraulic lift is similar to devices such as levers or pulleys in that it allows an operator to generate tremendous force with minimal input by manipulating the principles of physics.

To most professional automotive mechanics, and even many home mechanics with a basic floor jack, the thought of car maintenance without hydraulic assistance is almost unimaginable. Astonishingly, more than 150 years elapsed between the invention of the first steam-powered automobiles and the first hydraulic lift patent in 1925 — a revolutionary concept in its own time that continues change with scientific and mechanical innovations. Visit here; Automotive Lifts.

What Were Repairs Like Before the Hydraulic Car Lift?

Before car lifts, mechanics tried their best to squeeze underneath cars to perform routine work. With little room and terrible visibility, mechanics required a new approach for car repairs.

To improve access to the underside of cars, garages excavated pits, placing short ramps on top. Once the vehicles were on the ramps, mechanics could climb into the holes to complete work. While this alternative demonstrated the advantages of increased mobility for mechanics, but these pits presented their share of issues.

To begin with, although pits provided more maneuverability than simply crawling under the car, the lack of lighting still made visibility an issue. Moreover, excavation and appropriate accommodations were expensive, which meant that many garages could not afford to use this technique.

What Events in History Led to the Hydraulic Car Lift?

The field of hydraulics had been established and expanded centuries before the first lift, as several scientists refined both the mechanical understanding and application of Pascal’s initial work. Claude Couplet and Charles Bossut both described concepts of fluid friction in the early 1700s. Then, in the late 18th century, Pierre Louis George Du Buat conducted experiments and wrote extensively on both theories and applications of hydraulics. These scientists were instrumental in developing a sophisticated understanding of hydraulic potential and use.

Inventors quickly made use of this knowledge — Joseph Bramah patented the first concept of a hydraulic press in 1795, which provided a base foundation for many future inventions. Items such as dentist chairs applied and develop the technology in the mid-1800s, and cranes and elevators also saw revolutionary changes as principles of hydraulic application continued to improve.