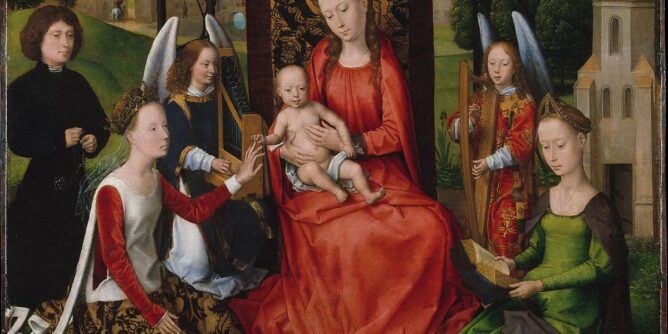 The beginnings of oil painting are recorded as early as the twelfth century in Northern Europe. But it was the virtuoso handling of the medium on the panel by early Netherlandish painters such as Jan van Eyck and Rogier van der Weyden in the fifteenth century that represented a turning point in its eventual adoption as the major painting medium in Europe in the sixteenth century. By then, Jan van Eyck had been incorrectly credited with the “invention” of oil painting. Visit here; Antique Italian Oil paintings.

The versatility of oil paint made it an essential factor in realizing the new artistic vision of early Netherlandish painting, which combined extraordinary realism with brilliant color. Admixture in oils makes most pigments translucent, allowing artists to apply their colors in thin layers, or glazes, thereby generating the rich, glowing reds and greens seen for example in the Arnolfini Portrait by Jan van Eyck, the Portrait of a Carthusian (49.7.19) by Petrus Christus, or Hans Memling’s Virgin and Child with Saints Catherine of Alexandria and Barbara (14.40.634). The convincing realism of Robert Campin’s Merode Triptych, and in particular the scene of Saint Joseph in his workshop, also relies in part upon the capacity of oil paint to allow even brown or earth pigments to be glazed across broad areas to develop shadowy half-tones or a sense of light filtering into a dim interior (detail, The Annunciation Triptych, 56.70).

Oil paint is highly flexible in that it admits application both in thick impasto and fine detail: countless types of descriptive brushstroke are possible in oil. Since it is slow drying, it can be carefully blended to make soft, seamless shadows essential for the suggestion of three-dimensional form, as well as worked while still wet. All these properties make it especially suitable to communicate the reflective properties of different surfaces, from polished marble to dazzling jewels, from soft velvet to luminous highlights on hard metal plate: such textural differences are flawlessly captured in Van Eyck’s Van der Paele Virgin. Similarly, the oil medium is able to imitate convincingly fleeting effects of rippling, transparent water or moving clouds, as shown in Van Eyck’s diptych of the Crucifixion and Last Judgment (33.92ab).

In stark contrast, the medium of egg tempera, traditional in Southern European panel painting, results in a more schematic rendition of light, shade, and color. Egg dries quickly to a relatively light tone, is suitable for bright colors, and must be applied thinly in short, hatched strokes. Although he may have used a little oil to modify the egg tempera medium in his Virgin and Child, Carlo Crivelli applied the egg medium in distinct, light diagonal strokes, following traditional practice.

In 1464 the Italian architect Filarete expressed admiration for the Netherlandish oil technique specifically. Hints of interest among Southern European artists are evident well before this: the use of oil by the Ferrarese painter Cosmè Tura in the late 1450s suggests study of the technique of Rogier van der Weyden, whose works were collected by Tura’s patron, Leonello d’Este. In Naples, Niccolò Colantonio had adopted an oil technique by about 1445, perhaps as a result of links with the Netherlandish artist Bartélemy d’Eyck, who in all likelihood had been in the city around 1440, and who was possibly related to Jan van Eyck. Colantonio himself may have taught the Sicilian Antonello da Messina, whose experiments in oil were matched by his proficiency in rendering minute detail in the Netherlandish fashion (Christ Crowned with Thorns, 32.100.82). The traditional view that Antonello introduced oil painting to Venice during his stay in 1475/6, however, is belied by Giovanni Bellini’s use of oil as early as the 1460s, reflecting an earlier knowledge of the medium, perhaps inspired in part by imported pictures. A parallel structure of adoption occurred in Spain. In his will of 1448, the artist Joan Reixach, active in Valencia, specified that a painting he owned by Jan van Eyck was painted in oil, still a novelty in Aragon. It has been proposed that the itinerant painter Bartolomé Bermejo, recorded in Aragon from the late 1460s to the 1490s, was trained by a Netherlandish master, but this may undervalue the knowledge of oil painting available in Spain itself, built up through strong cultural links with the Netherlands. Other artists in Southern Europe learned Netherlandish handling of oil through a combination of travel, imported paintings, and information gleaned from those who had contacts with the Netherlands.