National security adviser Robert O’Brien and others are looking part ways with Donald Trump’s force. All important members of the US are not happy with o a pro-Trump mob breaching, which is happening in Washington.

Since losing precious elections to Joe Biden, the ability of Trump’s decision-making power has taken a huge chunk of his supports. Many do believe the fact that Trump should have done a better job when it comes to handling the COVID-19 pandemic.

Robert O’Brien has been an important part of President Trump’s leadership. However, even he does not seem satisfied with the way the current government is handling the situation.

Many sources believe the resignation is coming soon! 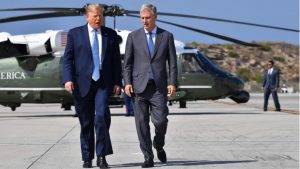 “I just spoke with Vice President Pence. He is a genuinely fine and decent man. He exhibited courage today as he did at the Capitol on 9/11 as a Congressman. I am proud to serve with him,” O’Brien said

Trump’s plans of making things hard to adjust in these dark periods are not looking great in terms of ending his journey as a leader of the United States in a better manner.

“We’re going to walk down to the Capitol. And we’re gonna cheer on our brave senators and congressmen and women. And we’re probably not going to be cheering, so much for some of them, because you’ll never take back our country with weakness, you have to show strength and you have to be strong,” Trump said at his rally on the Ellipse.

The political fight in the US capitol has taken the interest of worldwide media. In December 2019, Joe Biden’s team lashed out at the current power for not helping the process of changing chairs.

However, the team of Trump does not believe that they are doing their level best to pass the line to the next President.