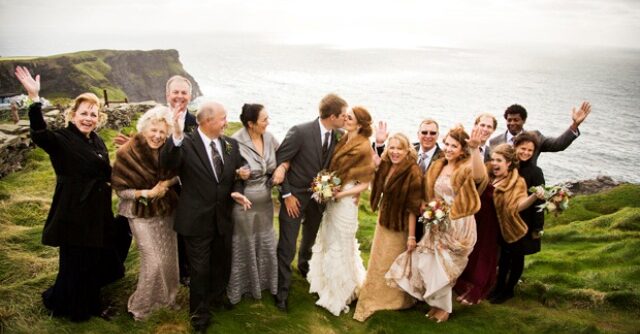 The Cliffs of Moher are one of Ireland’s most popular tourist attractions. When you see them for yourself you will immediately understand why. They are huge! Standing on top of a 700ft high cliff top, overlooking the wild Atlantic below is quite an experience. The views are insane and so many couples want to get married here for that reason. There’s also a bunch of friendly Irish pubs, filled with Irish music and lots of locals to head to afterward. Many couples love to end their elopement day in the pub with a pint of Guinness in their hands, dancing, and singing with the friendly locals.

The weather in Ireland is famous for being wet, there is no real rainy season here, it just rains all year long. The weather is mild is every season, it’s never that cold in winter or that hot in summer, the same goes for the rain, it’s very rarely torrential. So what does this mean for your elopement planning? You should pick the time of year that works best for you and be prepared that it might rain a little at some point during your elopement.Visit here; Wedding photographer Cliffs of Moher.

If you want to be warmer then you should opt for May through to September as they are the warmest months. The highest average temperatures in Doolin are around 64℉ in August and the lowest average temperature is in January where it’s around 33℉. January & February are really the only months you may want to avoid due to the high winds and colder temperatures. Sometimes the wind chill factor can make the conditions quite challenging.

For any couples that have their hearts set on a winter elopement, you should check out my guide to keeping warm during colder elopements.

Ideally, you want to stay around Doolin or Lahinch so that you’re as close as possible to the Cliffs. There are lots of B&B’s and a few hotels in the area, however, I would recommend hiring an Airbnb. The benefits are that there is no one else around whenever you’re getting ready and you’ll be able to choose one with nice bright rooms for your prep shots.

WHICH AIRPORT SHOULD YOU FLY INTO?

Most couples fly into Shannon International or Dublin Airport. Shannon would be slightly closer but it doesn’t serve as many US airports as Dublin. 99% of couples eloping at the Cliffs of Moher plan to do a road trip around Ireland during their stay so they aren’t too worried that the airport is further away.

MUST SEE PLACES NEAR TO THE CLIFFS OF MOHER

Some places that you need to see before and after your Cliffs of Moher elopement are the Ring of Kerry, the Dingle Peninsula, Skellig Michael, & Galway. These places are all amazing and it will take you at least a week to see them all properly. If you have more time you could travel all the way up the Wild Atlantic Way to County Donegal & Northern Ireland. The Causeway Coast in Northern Ireland is one of the most beautiful places in the world and would be well worth the drive.