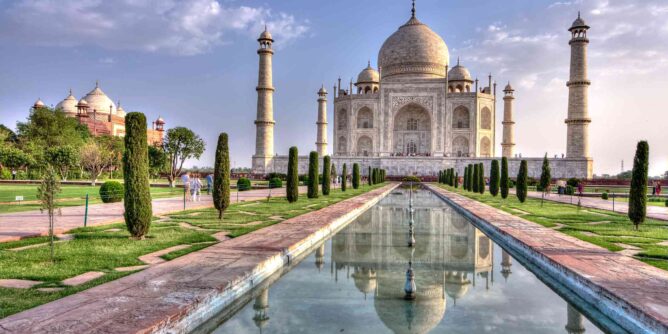 The world is filled with several unique architectural landmarks. What makes these buildings unique is the cultures of different places and the purpose for which they were built. Architectures all in different countries were tasked to bring designs to life. They put in a lot of work on complex ideas to transform them into magnificent landmarks that people adore all around the World. We have compiled a list of the ten most iconic architectural landmarks in the World in this piece. So, let’s get right into it!

Taj Mahal is one of the iconic buildings located in India. The landmark was built from 1631 to 1648 at the order of the Mughal Emperor Shah Jahan in remembrance of his late wife Mumtaz Mahal. The building is made from the composition of marble mausoleums, which are surrounded by gardens. Also, the landmark is an attraction for Muslims in India.

2. The Pyramids of Giza — Giza, Egypt

Another beautiful landmark of the World is the Pyramids of Giza, located in Giza, Egypt. These pyramids are the oldest among the Seven Wonders of the Ancient World. Most people believe that the tower was built as a tomb, which took between 10 and 20 years before completion. Furthermore, the landmark has attracted tourists from all over the world to behold the wonder.

One of the iconic buildings you will find in London is the Westminster Abbey church, located beside the houses of Bin Ben and Parliament. The building is filled with statues, tombs, and plaques of famous people such as Martin Luther King, Edith Cavell, and Henry Purcell. Many people from around the world come to the church to pay their respects.

The Colosseum which is located in the ancient city of Rome is another spectacle to behold. Emperor Vespasian built it in 72 C.E. as an amphitheater that hosted fights between gladiators. Then, the iconic landmark hosted about 50,000 spectators at the grand opening of the Colosseum.

Let’s leave the ancient city of Rome and come to Spain, where tourists will find the Casa Mila, located in Barcelona. The landmark is one of the best works of Spain’s indigenous architect — Antoni Gaudi, who died in 1926. The famous building is located in the Eixample district, listed by UNESCO as the world heritage site in 1984.

Another historic landmark you will find in the ancient city of Barcelona is the Sagrada Familia church. The landmark was also one of the works of Antoni Gaudi, which was started by another famous architect – Fransisco del Villar, in 1882. Since it is a church, the project was funded by outside donations from its 2.5 million yearly visitors.

Located in Cambodia’s northern province of Siem Reap, Angkor Wat is one of the famous archaeological sites in the world. It has a total distance of 400 square kilometers that houses several temples, communication routes, and hydraulic structures. Additionally, the temples in the building symbolize the cultural and religious beliefs of some parts of Siem Reap.

Here is another remarkable structure from Italy, but this time from the city of Pisa. It is one of the most iconic structures from medieval Europe. Furthermore, the Leaning Tower of Pisa is about 60 meters high, leaning at about a 10-degree angle. The construction of the tower began in 1773 and took about 200 years for its completion. If you are getting a bit overwhelmed with all this information you can take a break by visiting Platincasino for a fantastic gaming experience.

The Potala Palace is another incredible landmark in the World located in Lhasa, China. It was established in the 7th century to symbolize Tibetan Buddhism. At the complex, you will find White and Red Palaces built on Red Mountain in the center of Lhasa Valley. Besides the palaces, you will find the Jokhang Temple Monastery, a religious complex for Buddhists.

Another beautiful landmark you can travel to Istanbul to view is the Hagia Sophia building. The edifice was erected in the 6th century so that Christians all over the world could come and worship. Subsequently, the landmark has been converted to a mosque, a museum, and now, a mosque again. The conversion came as a shock to many people, including UNESCO.

Overall, all these landmarks were designed by some of the best architects the world has ever known. These beautiful structures attract several tourists and religious worshippers around the World. For example, a trip to Spain will take you to the Casa Mila and Sagrada Familia in Barcelona, designed by the famous architect — Antoni Gaudi. Italy is also another historic country with several historic buildings, such as the Leaning Tower of Pisa and the Colosseum in Rome. Unarguably, there are more landmarks in the World, but we have carefully made the best ten picks in this article.